Archetypes are one of my favorite RPG tools. Archetypes are example characters that personify the setting or campaign. They illustrate to new players what kinds of characters inhabit your world. I first encountered them back in Shadowrun 1st Edition. If you remember the Shadowrun book, it had these great color glossy pages with a picture and a fully stated character for each archetype. Here's the Street Samurai from my Shadowrun book. Note the pencil marks on the page tracking his health. I really wish teenage me hadn't written in my books. 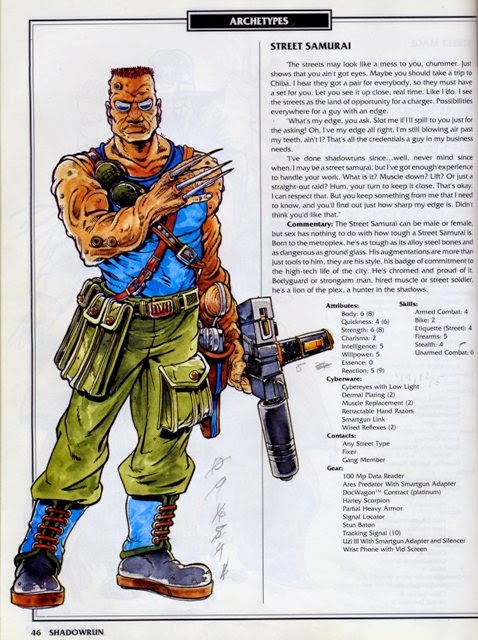 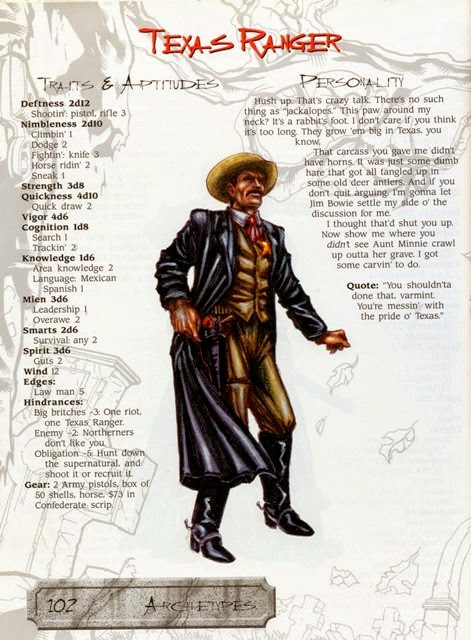 I usually create a set of archetypes for my new campaigns. Archetypes really let the players get a feel for the setting. The Archetypes also become a set of initial NPC to populate your world.

I am working with my friend +Chris Bare on his new RPG. We are planning to co-GM a play test session later this year at Dragoncon. He's going to handle all the rules and I'll be creating the characters and the adventure. We're both big fans of Thundarr so the setting is a sorcery and super-science apocalypse.

The Barbarian
"Lords of Light!"
Likes: freedom, sorcerers, Moks, catch phrases
Dislikes: wizards, technology, slavery
Barbarians are the inheritors of the broken world. The old world is gone and the barbarians are forging a new one.  Wizards, monsters, sorcery, and super science aren't going to stand in their way. Barbarians distrust technology and hate wizards.

The Sorcerer/Sorceress
"Bullheaded Barbarian!"
Likes: barbarians, restoring civilization, puns, explaining things
Dislikes: wizards, slavery
Sorcerers are able to work magic much like the wizards.  Unlike the wizards, Sorcerers steer clear of the corrupting influence of demons and techno-magical devices and are able to maintain their sanity. They are few in number but do what they can to assist those who fight the wizards.

The Mok
"RRAWARARRRA!"
Likes: food, barbarians, friends, throwing things.
Dislikes: slavery, wizards, fire, water, flying
Moks are a primitive race of super strong Lion-men that have emerged since the cataclysm.  They are firmly allied with the Barbarians against the wizards.

The Ranger
"One Riot. One Ranger."
Likes: the rule of law, survivor communities, guns
Dislikes: raiders, mutant monsters
Part sheriff, part scout, part sniper.  The Rangers are the descendants of a group of Army Rangers that survived the cataclysm.  The Rangers keep tabs on the raiders, wizards, and monsters of the wasteland and protect the survivor communities.  They get along well with the Barbarians and the Road Warriors. (The Ranger is one of my favorite archetypes. They show up in a lot of post-apocalypse settings. All the way back to the Desert Rangers in Wasteland.)

The Brotherhood Scribe
"I'll encourage people to name their non-ugly children after you."
Likes: old books, data caches, The Brotherhood
Dislikes: book burning, apocalyptic cults
Scribes seek out old libraries and data banks in order to preserve knowledge.They are experts in old world tech and often assist survivor communities.  A scribe is normally partnered with a scout for missions.

The Vault Dweller
"Do you know were I can find a water chip?"
Likes: Being safe in their vault
Dislikes: Anything outside the vault
Vault Dwellers live in giant underground complexes meant to keep the remnants of humanity safe until the world was ready for them to emerge.  The problem is the world may never be safe again. A vault dweller has either left their vault in search of something or left voluntarily seeking a life outside the vault.

The Morrow Project
"This is not what I expected."
In the early 1970s, a billionaire who was either very smart or very crazy predicted the coming cataclysm. He gathered up small groups of like minded people, trained them, and froze them in cryo-stasis in underground bunkers. After the cataclysm, the sleepers would emerge assist the survivors in rebuilding. No plan survives contact with a worldwide cataclysm. Many of the stasis chambers malfunctioned and only a few Morrow Project teams survived. The world of 3094 is not what the few surviving sleepers were expecting. Morrow Project team members are highly skilled and combat trained. If their bunker survived intact them may even have access to modern era gear.  ( The Morrow Project setting is cool. I never played it but I ruthlessly plundered it's treasures for my Aftermath game back in the eighties.)

Spoiler!
If you read this far and want to know the secret of the Road Warriors click here.
Posted by Ryan at 9:27 AM