This weeks blog entry is taking a little longer for me to write and edit, so here's a old story to tide you over.  This story is an RPG legend. I have no idea if it's true.  I first read it on a Usenet news group back in 1991. It even has it's own wikipedia entry.  The story predates the internet, handed down from gamer to gamer through the years. 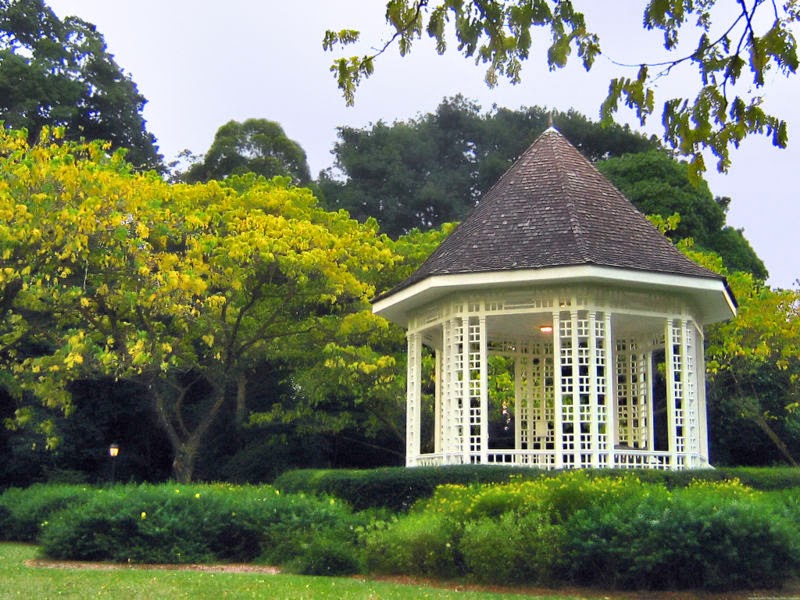 The Tale of Eric and the Dread Gazebo
by Richard Aronson

In the early seventies, Ed Whitchurch ran “his game”, and one of the participants was Eric Sorenson. Eric plays something like a computer. When he games, he methodically considers each possibility before choosing his preferred option. If given time, he will invariably pick the optimal solution. It has been known to take weeks. He is otherwise, in all respects, a superior gamer.  Eric was playing a Neutral Paladin in Ed’s game. He was on some lord’s lands when the following exchange occurred:
ED: You see a well groomed garden. In the middle, on a small hill, you see a gazebo.
ERIC: A gazebo? What color is it?
ED: [pause] It’s white, Eric.
ERIC: How far away is it?
ED: About 50 yards.
ERIC: How big is it?
ED: [pause] It’s about 30 ft across, 15 ft high, with a pointed top.
ERIC: I use my sword to detect good on it.
ED: It’s not good, Eric. It’s a gazebo.
ERIC: [pause] I call out to it.
ED: It won’t answer. It’s a gazebo.
ERIC: [pause] I sheathe my sword and draw my bow and arrows. Does it respond in any way?
ED: No, Eric, it’s a gazebo!
ERIC: I shoot it with my bow. [roll to hit] What happened?
ED: There is now a gazebo with an arrow sticking out of it.
ERIC: [pause] Wasn’t it wounded?
ED: OF COURSE NOT, ERIC! IT’S A GAZEBO!
ERIC: [whimper] But that was a +3 arrow!
ED: It’s a gazebo, Eric, a GAZEBO! If you really want to try to destroy it, you could try to chop it with an axe, I suppose, or you could try to burn it, but I don’t know why anybody would even try. It’s a @#$%!! gazebo!
ERIC: [long pause. He has no axe or fire spells.] I run away.
ED: [thoroughly frustrated] It’s too late. You’ve awakened the gazebo. It catches you and eats you.
ERIC: [reaching for his dice] Maybe I’ll roll up a fire-using mage so I can avenge my Paladin.

The above is Copyright © 1989 by Richard Aronson. Reprinted with permission. The author grants permission to reprint as long as all copyright notices remain with the text.
Posted by Ryan at 2:10 PM