For my Crawling Under a Broken Moon game I'm  creating both a one-shot adventure as well material for an ongoing campaign.   The one shot adventure will use the characters from Post Apoclypse archetypes.  One of those characters is Thundarr, of course, and what's Thundarr without his Sun Sword! 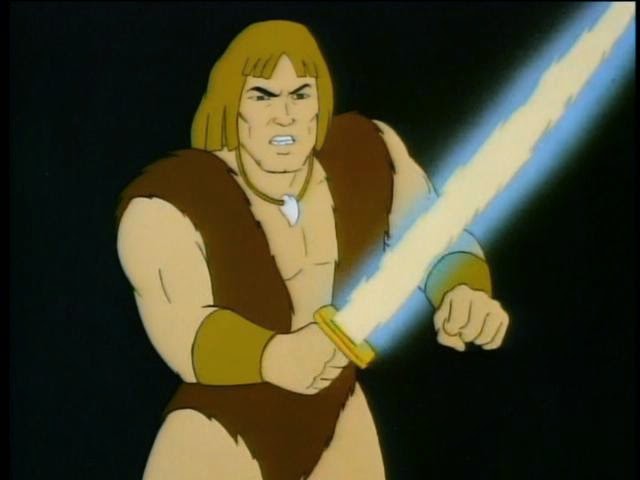 One of the many unique objects in Thundarr is the Sun Sword.  The shows creators were, well let's just say inspired by, Star Wars.  The Sun Sword is pretty much a lightsaber. In the show  Thundarr uses it to do all kinds of things, except actually cutting people up. I want to represent  how Thundarr uses the sword, but also make it a little more DCC-ish. What's more DCC than an intelligent magic sword?

The Sun Sword
The Sun Sword is an intelligent techno-magical weapon.  Its purpose is to defeat the wizards.  The sword will only come to life when wielded by a worthy (Lawful) user.  The sword exerts its empathy on the bearer to influence him to seek out and destroy wizards.  It does this by infesting its wielder with techno-magical nanites. These nanites bond the wielder to the sword.

The sword will not allow itself to be used on a normal person or humanoid. In most cases, the wielder will not even think to use it in this way.  Rather the bearer will use it in non-damaging ways like slicing an enemy's weapon in half.  The Sword is somewhat ambivalent about mutants and monsters and deals reduced damage if striking these types of creatures. (Judges discretion on what the Sword considers to be humanoid and what is a monster.) The Sword can be wielded at full damage against robots and animate non-living monsters. The Sun Sword will lose charge over time and need to be recharged.  The bearer will suffer penalties to his/her Strength and Stamina until it is recharged. This happens whenever the Judge wants it to.  If the wielder constantly goes against the sword it will become displeased and cease to function, waiting for a more worthy bearer.

The Sun Sword, Unique Artifact Weapon+2:1d16+2 damage; Int 12; AL Lawful; bane:wizards(The evil techno-wizards not all wizards) and demons (hardiness: take half damage from attacks from banes); communication:empathy, special purpose: rid the world of the wizards, special powers: create light in a 20' radius at will, eviscerator (if max damage is rolled roll again and add it.)

The Sun Sword can only be fully wielded by classes that use mighty deeds.  A mighty deed can be employed  to cut an enemy's weapon in half or perform other disabling moves. In a non-combat situation the Sun Sword can be used to cut/burn through whatever the Judge will allow.

The sword can always be used to attack it's banes, the evil techno-wizards of the broken world and demons. The sword will force an Ego check if used to attack a human or humanoid. The damage drops to 1d8+2 if used against mutants and monsters.