Spending your Loot in DCC 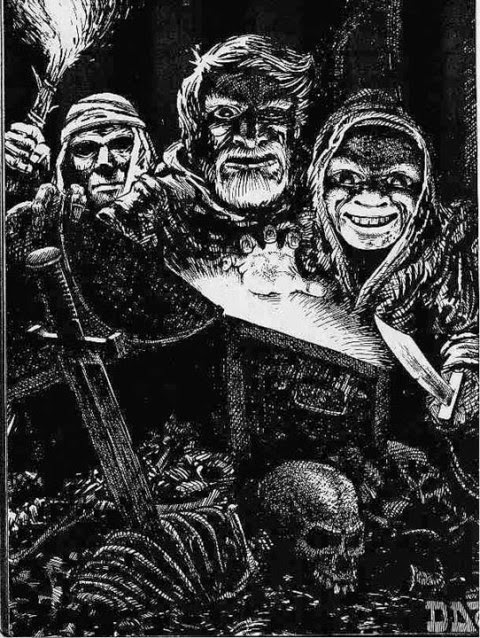 Last week on the G+ DCC group,  I asked the question “What do your players do with all the monetary loot they get?”  Check out the thread here.

I got a lot of great responses including:
"real heroes often squander their riches  on vice and debauchery  and realize that  money is only a minor step on their quest for power and legend." +Doug Kovacs

"The characters in my game are running a small kingdom. Also spell components.﻿" +Jesse Butler

"Conan rules. The PCs collect loot for loot's sake. Any time they return to civilization, they are assumed to blow the entire lot. First on reprovisioning basic supplies, repairing armor and weapons and paying tribute to gods and patrons, but principally on lavish accommodations, wine, women, dice, etc." +Ivan Stoner

"All the monetary loot" you say? We've barely found two coins to rub together" +Andrew Trent

"In the Barbarians of Lemuria RPG, you could not advance (a.k.a get XP) from an adventure until you explained how you blew through all of the loot you found. You could earn extra XP if you came up with awesome/ludicrous ideas that lead to a new adventure.﻿" +Reid San Filippo

+David Eppling even provided a link to some Carousing Rules by Jeff Reints which look interesting.

I'm not sure my players would accept that they blew all their loot on wine, companionship and song between every adventure though. Here's my take on what players could do with their loot.

A characters personality revolves around their alignment, so each alignment would have its own motivations for hoarding and spending loot.

Law
Lawful characters would want to establish order on the chaos of the world.  A lawful character would use their loot to establish a stronghold or build a castle. The would clear the land surrounding it of monsters and establish a safe place for civilization and order to flourish.  The Swords and Wizardry rulebook has great section on castle building that is short and to the point.  Also it's free.

Chaos
Chaotic characters have all kind of reasons to gain and spend loot.  Blowing an adventures worth of loot on raucous parties is just their style.  A chaotic character might also seek to become a warlord or bandit king,  rampaging across the countryside with a warband at their back.

Outside of alignment motivations, characters could spend loot to gain information about legendary artifacts, magical secrets, or the existence of certain patrons and the proper rituals to bond them.

In the same G+ thread, I also made a side note of " I let them buy potions sometimes but I was wondering if anyone had other ideas.﻿"  This spawned a whole second discussion about magical loot. I want to get into that as well, but  that's a whole nother post.

Email ThisBlogThis!Share to TwitterShare to FacebookShare to Pinterest
Labels: DCC