The Ammo Stash for DCC Firearms 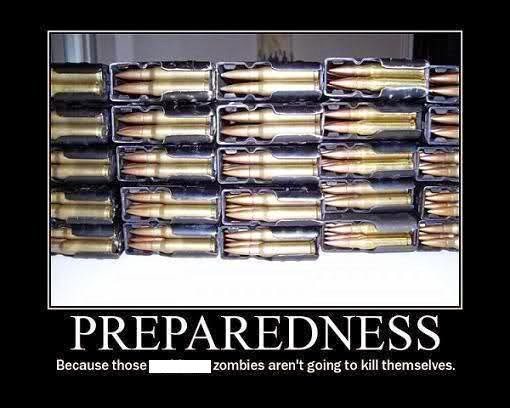 One of the biggest headaches in RPGs that employ firearms is tracking ammo.  In my modern campaigns like Delta Green.  I assume everyone has access to plenty of ammo. I don't worry about them running out unless they really start pumping out the lead or it suits the story.  In post-apocalypse games ammo is very scarce and a valuable commodity. I hate having to track every single bullet though.

Way back in 2011, +Jeremy Deram wrote a great article on his blog about tracking charges for magic items.  He expanded it into a full article in Fight On! #14.  I highly recommended both. I'm  using Jeremy's system for magic items in my Swords and Wizardry games, but I wanted something similar to track ammo for my Crawling Under a Broken Moon campaign.  I'm fine with tracking how much ammo is currently in a gun but tracking how much and what kinds of ammo the players carry around gets a little fiddly. Combining Jeremy's idea with the descending dice method in DCC I came up with the Ammo Stash.


Each time the character reloads one of their guns, they roll the die. If it comes up a "1" then the die drops down to the next lower die type. A character with a D30 stash has a lot of ammo. One with a D6 stash better be pretty choosy about who he shoots.  I like this because it lets me make ammo rare or plentiful without the  having to track how much ammo the players are carrying.  It also means I don't have to track a lot of different kinds of ammo for various weapons.  I can give out ammo as a reward by simply upgrading their current ammo die.  The player could also trade away some of their ammo by downgrading their die.  Players can even reload each others guns if they like. Post-Apocalypse games tend to be more cutthroat though. If a GM wanted a little more detail, they could assign an Ammo Stash die for each weapon the player has owns. This method can work equally as well for other OSR games that use firearms like Mutant Future.
The amount of dice in DCC allows for a lot of different stash sizes. If using the DCC funky sided dice aren't to your taste simply use Jeremy's Red-Yellow-Green system as written. Assign the ammo stash a die and a color and away you go!

Update: Charlie White over at Intwischa wrote a similar house rule back in 2011.  He even gets into the math as to why it works. Be sure and check it out as well.