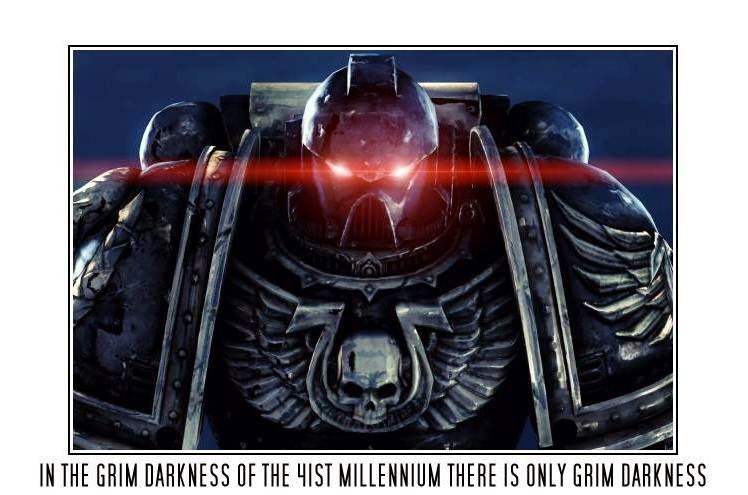 A few months back I split my 6 player Dark Heresy game into two groups. Scheduling became too difficult and the Dark Heresy system was too cumbersome with that many players.  One of the groups decided to switch to Dungeon Crawl Classics, the other group stuck with Dark Heresy.  This week the Dark Heresy group finally got together to continue the campaign.  Since I needed a way to explain their separation fro the rest of the group, I stared the story "in media res."   In other words, I threw them in a pit with no gear.

Here are the Inquisition Acolytes who are now fighting for their survival in the Grim Dark of the 41st millennium.

Ferus Metalus -  Tech Priest from the Lathe Worlds. Slowly replacing his organic parts to become closer to the Omnissah.  (I like how he used the fake 40k latin to make a name.)

I've written before that I'm not a huge fan of the Dark Heresy rules, while I am huge fan of the (somewhat over the top) setting.  Here's my collection of house rules that I use when running Dark Heresy.   If you don't want to read them right now here's a handy link with a PDF.

Dark Heresy House Rules
The Dark Heresy combat rules are terrible.  I use my own house rules for combat in order to speed things up.  If more detailed rules are needed, I  use the rules from the "Only War" rulebook.


Command is a very useful skill in combat.
A character with the command skill can make a command skill roll on their turn to:
Swap initiative order with someone
Give someone an initiative bonus

There are a ridiculous number of modifiers for shooting in Dark Heresy, ignore all of them except these.
If other modifiers are needed I'll ask you what your skill is and tell you if you hit or missed.

If you are shooting a single shot you get +10 BS.
If you take a half action to aim add +10 BS
If your gun has a laser sight Add  +10 BS
If your gun is Accurate add +10 BS
This means that if you aren't a "combat" guy you should shoot single shots cause you will get somewhere from +20 to +40 to your BS.
You CAN take a full action to aim for +20 BS.  That means you can only fire every other round. It's usually better to just aim for a half action.

A full auto weapon may suppress. To suppress someone, fire a full auto burst, if you roll under your BS, they must roll under their WP.  If they fail they are pinned. If they succeed, they may act but could hit by your suppression.

I don't use hit locations. If it matters where someone is hit I will roll the hit location with my super-nifty hit location die and not their weird table. When bad guys attack you it will always hit your body unless I tell you otherwise.  You may try to shoot a specific location at -20 BS.

Two-weapon fighting, swift attack, and lightning attack each have their own set of needlessly complicated rules.  Seriously, Two-weapon fighting is an entire page on it's own.  Just don't even bother with these unless you have the appropriate talent for each of these attacks. If you have one of these talents make sure you know how they work.

Overwatch is also needlessly complicated. On your turn you can go on overwatch.  If someone shows up before your next turn, you can shoot them.  (There how hard is that.)

If you roll a "10" when you roll for damage, you have scored a crit. Roll a 1d5 for how bad the crit is and let me know what you rolled and what kind of weapon your are using.

There are no modifiers for fighting in melee that you need to worry about.  If there are I'll let you know what they are at the time.  You can use pistols in melee, but you can't aim and you don't get any bonuses for being at point blank range. You can either dodge or parry a melee attack but not both.  You can dodge a pistol in melee.  If you are outside the melee, you can shoot single shots into a melee at -20 BS. You can fire semi-auto and full-auto into melee if you want but you pretty much have no idea who you will hit.
Posted by Ryan at 2:03 PM