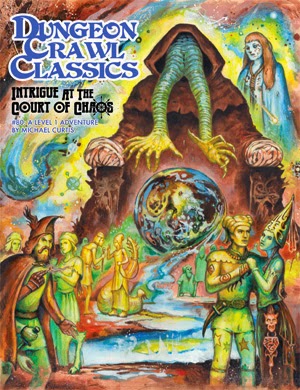 There are so many great level 1 DCC adventures that I can't decide which one I want to use in my current game. Instead, I decided to go semi-sandbox style and let the players choose.  They will hear the following rumors and pick one to follow-up on. If they decide not to follow any of these leads and wander off randomly then the group is obviously perfect agents of Chaos......

"A nearby village is plagued by strange worms that drain the blood from their victims."

"The fabled Black Tower of the mad wizard Sezrekan is only accessible one night a decade.  Tomorrow is that night."

"I can tell you where the legendary Cave of Secrets is located. Those who enter can have any question answered. It also is rumored to contain great treasure."

"A great rift has opened up in the ground. Horrid man-apes are emerging and attacking nearby villages."

"I will sell you a map to the the tomb of the legendary king of the mountain tribes.  The tomb is said to contain the king's magic artifacts."

"Strange men have been emerging from a mist that springs up out of nowhere and attacking local farms. They left something behind after their last attack."