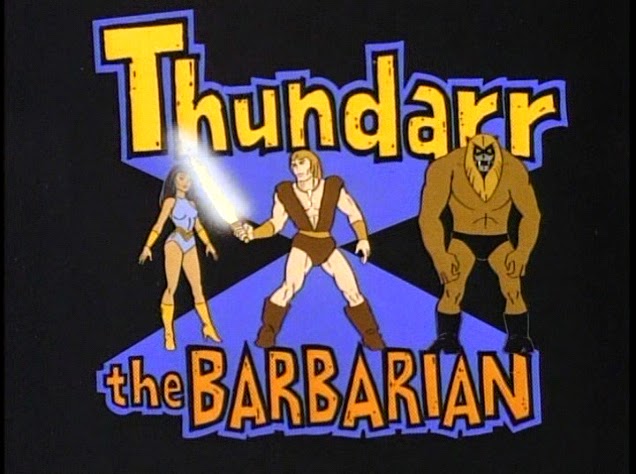 I'm working on  a campaign guide for my Thundarr style post apocalypse DCC game. In this post, I'm adapting the post-apocalypse archetypes  I wrote up a few months ago. In a future post I'll be adapting the Core DCC classes to my PA setting.

The Barbarian
"Lords of Light!"
Likes: freedom, sorcerers, Moks, catch phrases
Dislikes: wizards, technology, slavery
Barbarians are the inheritors of the broken world. The old world is gone and the barbarians are forging a new one.  Wizards, monsters, sorcery, and super science aren't going to stand in their way. Barbarians distrust technology and hate wizards.

The Barbarian class from Issue #1 of D.AM.N fits perfectly with the idea of a Thundarr-style character. The Barbaric acts feature brings it to life:  Jumping from horseback, tackling groups of mooks, knocking down the ceiling, etc. The warrior core class could also easily be used but I think the Barbarian is a better fit.

The Sorcerer/Sorceress
"Bullheaded Barbarian!"
Likes: barbarians, restoring civilization, puns, explaining things
Dislikes: wizards, slavery
Sorcerers are able to work magic much like the wizards.Unlike the wizards, Sorcerers steer clear of the corrupting influence of demons and techno-magical devices and are able to maintain their sanity. They are few in number but do what they can to assist those who fight the wizards.

Sorcerers are an unique race. They appear human but are either a new race of mutants, aliens from another planet, or dimensional travelers. Sorcerers function as the Elf class from the core rules. Sorcerers strive to keep their magic pure. As long as a Sorcerer never Spell burns, bonds a patron, or uses techno-magic, they never suffer from corruption.

The Mok
"RRAWARARRRA!"
Likes: food, barbarians, friends, throwing things.
Dislikes: slavery, wizards, fire, water, flying
Moks are a primitive race of super strong Lion-men that have emerged since the cataclysm. They are firmly allied with the Barbarians against the wizards.

Rather than writeup a whole new class for Moks, I use the Mutant class from CUBM #2.  Moks always get the Hybridization feline mutation and a random Physiology mutation.

The Ranger
"One Riot. One Ranger."
Likes: the rule of law, survivor communities, guns
Dislikes: raiders, mutant monsters
Part sheriff, part scout, part sniper.  The Rangers are the descendants of a group of Army Rangers that survived the cataclysm.  The Rangers keep tabs on the raiders, wizards, and monsters of the wasteland and protect the survivor communities. They get along well with the Barbarians and the Road Warriors. (The Ranger is one of my favorite archetypes. They show up in a lot of post-apocalypse settings. All the way back to the Desert Rangers in Wasteland.)

The Ranger class from Crawl #6 works great in a PA setting.  A PA Ranger is trained in firearms. Rather than specializing in either bow or two-weapon fighting though, the PA Ranger is either a gunslinger or a sniper.  Gunslingers employ pistols and small guns, while Snipers prefer large rifles.  Rangers use their guns when performing mighty deeds.

The Brotherhood scout uses the Thief class from the core rulebook. They gain training in firearms and energy weapons . The Scout can "backstab" with a gun if the target is unaware.  In the far future there aren't many scrolls, but there are technological devices.  The  "cast spell from scroll" skill becomes "use techno-magical device."  The Halfing could also be used for the Brotherhood scout with the only adaptation being that they are trained in firearms and energy weapons.  Their two-weapon fighting ability can be used with pistols.

The Brotherhood Scribe
"I'll encourage people to name their non-ugly children after you."
Likes: old books, data caches, The Brotherhood
Dislikes: book burning, apocalyptic cults
Scribes seek out old libraries and data banks in order to preserve knowledge.They are experts in old world tech and often assist survivor communities. A scribe is normally partnered with a scout for missions.
The Technologist from CUBM #1 makes a great Brotherhood Scribe with no adaptations at all.

I heard a rumor that there might be a Road Warrior class in an upcoming issue of CUBM, which would be awesome. In the meantime, Road Warriors use the Warrior class from the DCC core book.  They are trained in firearms and start the game with some kind of vehicle. (CrawlJammer #1 has rules for vehicles.) They receive all the normal bonuses from their deed die but can only perform mighty deeds with their vehicle.
The Road Warriors have a secret.  If you want to know the secret click here.

The Vault Dweller
"Do you know were I can find a water chip?"
Likes: Being safe in their vault
Dislikes: Anything outside the vault
Vault Dwellers live in giant underground complexes meant to keep the remnants of humanity safe until the world was ready for them to emerge. The problem is the world may never be safe again. A vault dweller has either left their vault in search of something or left voluntarily seeking a life outside the vault.

A lot of different classes could be a good fit for a Vault Dweller archetype, depending on what their job was before they left the vault. A Vault soldier would be the warrior class. A Vault scientist would be a Technologist.  An even more interesting idea though is to adapt the dwarf into a Vault Dweller.  Having lived their whole life underground the Vault Dwellers have adapted to that environment and gain all the racial abilities of the Dwarf.  Instead of detecting gold and gems, Vault Dwellers can detect hidden technology caches.  Vault Dwellers have a keen survival instinct. They replace the Dwarf's sword and board ability with Dodge. Vault Dwellers may attempt to dodge one incoming attack per turn by rolling their deed die and adding it to their AC. All Vault Dwellers are trained in firearms.

The Morrow Project Sleeper
"This is not what I expected."
In the early 1970s, a billionaire who was either very smart or very crazy predicted the coming cataclysm. He gathered up small groups of like minded people, trained them, and froze them in cryo-stasis in underground bunkers. After the cataclysm, the sleepers would emerge and  assist the survivors in rebuilding. No plan survives contact with a worldwide cataclysm. Many of the stasis chambers malfunctioned and only a few Morrow Project teams survived. The world of 3094 is not what the few surviving sleepers were expecting. Morrow Project team members are highly skilled and combat trained. If their bunker survived intact them may even have access to modern era gear.  ( The Morrow Project setting is cool. I never played it but I ruthlessly plundered it's treasures for my post apocalypse games.)

Morrow Project sleepers use the Cleric class. Rather than their abilities deriving from a divine entity , all of their class abilities come from technological devices. They are able to "lay on hands by using their med-kit. Each of their spells comes from a different piece of tech. Disapproval represents the technology breaking down or needing more supplies. The sleeper must spend time repairing their tech or seeking out a Morrow Project cache and replace their gear. The Paladin class from Crawl #6 could be used with the same adaptations to represent a Morrow Project soldier. All Morrow Project characters are trained in firearms.