Welcome to the Band! 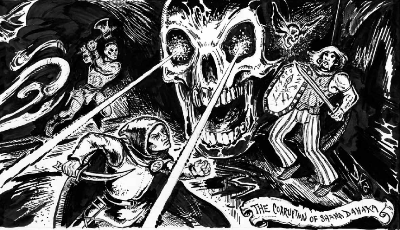 In DCC, a group of adventurers is called a Band  rather than a party.  After the completion of the current adventure one of your surviving peons becomes Level 1 and a full adventurer.  Any other surviving peons remain level 0 and become your henchman.  They can also be used as a replacement character should your primary character die. A replacement peon will always be one level behind the rest of the group, so if your main PC dies at level 3, your replacement peon will be level 2.

Choose one of the classes below for your character.  Elves, dwarves, and halfings can use either their racial core book class or one of the optional classes for their race.

The core classes start in the DCC core book on page 27.  I've noted the stats below that help each class.  All classes benefit from Stamina and Luck. Strength benefits all melee fighters. When you generate the hit points for level one you add them to your peons current HP.   (It helps a little!)

Cleric
Clerics can cast magic spells, lay on hands, and turn unholy.  DCC clerics don't have healing spells. All healing is covered by the lay on hands ability.  Clerics must choose a god that matches their alignment. There is a list of gods on the core book on page 32.  You can choose one of these or make up your own. Personality is the most important stat for a cleric.

Thief
Thieves have the ability to backstab, sneak, hide, pick pockets, climb, pick locks, find traps, disable traps, forge documents, read languages, handle poison, and use magic scrolls.  Unlike other classes, Thieves can slowly recover any luck they burn during an adventure.  Agility is the most useful stat for thieves. Int and Per also factor into some thief skills.

Warrior
Warriors are the fighting class. They have the best attack bonus and hit points.  Warriors also have the ability to perform "Mighty Deeds of Arms." When a warrior attacks they can perform special maneuvers. This can be anything from tripping your opponent to swinging from a chandelier.  Warriors need Str and Stm.

Wizard
Wizards are the primary spell casting class. In addition to spellcasting, Wizards can gain power by forming a bond with a powerful supernatural entity. Wizards can also burn STR, STM, and AGI to increase their spellcasting. If you are considering playing a wizard look over the Magic chapter in the Core rulebook. There's more involved with being a wizard than other classes.  The primary stat for Wizards is INT.

Dwarf
Dwarves are similar to warriors and can perform Mighty Deeds. In addition, Dwarves are skilled at fighting with a sword and shield, and get a bonus "shield-bash" attack.  STR and STM are important for Dwarves.

Elf
Elves are a "sword-mages", with skills of both a warrior and a wizard.  They don't have the warrior's Mighty Deed ability but they have all the spell casting abilities of a wizard.  In addition, Elves commonly form bonds with supernatural creatures and automatically gain the patron bond and invoke patron spells.  The only stat that's not important for a elf is PER.

Halflings
"Rolling Balls of Ninja Fury"  Halflings are masters of two-weapon fighting and can sneak and hide like a thief.  In addition, Halflings are lucky for the whole party.  A Halfling can burn their own luck to help out others. Halflings also regain their luck slowly over time like a thief.   AGI and STR are important for halflings as is Luck.

Human Optional Classes
This first set of classes are from Crawl #6. (The Gnome is also in this issue but we aren't using it.)

Bard
Bards have limited spellcasting ability, can grant bonuses using their bardic talents, and can use bardic lore to gain uncommon knowledge. Bards are also decent fighters. INT and PER are important for bards.

Paladin
Paladins are a more combat oriented version of the cleric.  They have a limited ability to cast Cleric spells, can lay on hands, instill bravery in their companions, and cause fear in their foes.  Paladins must choose a deity. PER is important for Paladins.

Ranger
Rangers are a variation the Warrior Class.  They specialize in either two-weapon fighting or archery. They can use Mighty Deeds like a warrior based on their chosen specialization.  Rangers also gain a number of wilderness skills.  AGI ,STR, and PER  are important for a ranger

Barbarian - From DAMN #1.
This class is a variant of the warrior in the spirit of Conan. Barbarians have more HP but tend to wear lighter armor.   Barbarians can perform feats of daring,endurance, and physical prowess know as Barbaric acts.  (Just think, "What would Conan do?") Barbarians also cause enemies to attack them rather than other party members in battle.  STR and END are important for a barbarian.

Other Races Optional Classes
These classes are from Crawl #10

Dwarven Priest
A combination of the Dwarf and the Cleric.  The Dwarven priest has all the abilities of the cleric (magic, lay on hands, turn undead)  as well as the ability perform deeds of arms starting at third level.  They cannot shield bash like the core rulebook dwarf.  PER and STR are important for a dwarven cleric.

Elven Rouge
An Elven Rogue is a thief-mage rather than the sword-mage like the core elven class.  They gain all the thief skills but do not gain the ability to regenerate luck like a thief. The elven rouge has the same magical ability of the core rulebook elf.

Halfling Burglar
A halfling burglar is a full halfing thief rather than the "sneaky warrior" of the core book halfling. They receive all the same skills as a thief.  They retain the two weapon fighting and luck abilities of the core halfling class.

Halfling Champion
A halfling who has chosen a more martial path.  Halfling champions have the two weapon fighting and luck of the core halflings. Additionally, they are able to use Mighty Deeds like a warrior.  They can also use their luck to allow other members of the band to perform a mighty deed.