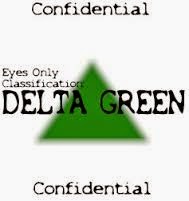 This post was supposed to go up a while back. Thanksgiving and illness got in the way, so it's a little late!
This week A few weeks ago, I ran Call of Cthulhu for my regular gaming group. The intrepid Delta Green monster hunters headed to San Antonio to investigate an earthquake. The earthquake was predicted by a madman, who then escaped from police custody. The team did well gathering all the clues and following all the leads. They stumbled a little (argued a lot) when planning the infiltration of the cult. We ended the session with the investigators ready to sneak onto the cultists compound and find out what is going on.  I'm running Delta Green adventure "Aftershock," which is free over at the Delta Green site.

Last week, The week after, I ran Dark Heresy for my online group. I used Tattered Fates, the first adventure of the Haarlock Legacy.  The adventure started with the characters captured and stripped of all their cool techno gear. I thought this would be a neat survival-horror setup. The players would be forced to scavenge and improvise. Unfortunately, the Dark Heresy rules broke down on the side of the road. Again. The final dramatic escape scene ended up taking way too long. No one could hurt anyone with their crappy scavenged guns. I swear if we weren't 5 years into this campaign I'd adapt Dark Heresy to the Call of Cthulhu rules. The adaptation wouldn't even be that hard. The two systems are almost the same in the first place.

Email ThisBlogThis!Share to TwitterShare to FacebookShare to Pinterest
Labels: Call of Cthulhu, Dark Heresy, my campaigns