Tower of the Black Pearl 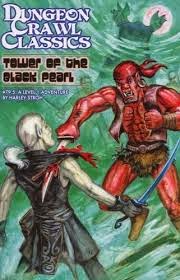 Last week, the intrepid reavers of my DCC game finished Tower of the Black Pearl, an excellent adventure by +Harley Stroh and +Daniel Bishop.  Highlights of the game included:
The characters managed to escape the tower but their boat did not survive the hurricane.  They have washed up onshore, battered and bruised, far from their home.
Posted by Ryan at 8:29 AM