My Swords and Wizardry House Rules 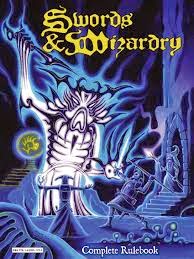 Back in 2013, I attended North Texas RPG con for the first time. I had heard about the OSR and D&D retro clones but had never played any. I'd taken a look at both Labyrinth Lord and OSRIC but neither of those system's interested me. At the con, I walked into the Frog God Games room and started browsing through their books. I started flipping through the recently published Swords and Wizardry Complete rulebook. I was enthralled.  Here was a simple workable system that would allow me to run any classic AD&D adventure I wanted. I stood there at the booth for half an hour reading the book. I bought it and never looked backed.  (The PDF of Swords and Wizardry is free.)

Stats
Roll 3d6 for stats and place them wherever you like.
You may choose to replace any one stat with a 16.
Only fighters get more than +1/+1 damage due to STR.
Clerics get a bonus first level spell if they have a WIS >15.

Assassin
Add level to backstab damage.
Assassins gain +2 bonus on save vs poison.

Cleric
Clerics may cast CLW once per day in addition to their normal spells.
Clerics may scribe scrolls for 100 gp per level of the spell.
Clerics must be Lawful or Chaotic, a neutral cleric is a druid.
Clerics must choose a deity.
Clerics receive bonus spells from their deity.

Fighter
Str bonus applies to both HtH and ranged for fighters.

Magic User
Magic users can cast read magic and detect magic once per day in addition to their normal spells.
Magic Users may scribe scrolls for 100 gp per level of the spell.

Monk
Monks can use potions.

Halflings
Halflings may be Fighters, Thieves, or Fighter/Thieves.

Shattered Shields
Any damage from a single attack can be ignored by being absorbed by a shield, including a critical hit. When used this way, the shield immediately becomes unusable, shattered by the blow. Magic shields, on the other hand, don’t get destroyed, but are unusable until repaired by an armor smith.

Helmets
If you are wearing a helmet and take a critical hit that involves the head, you may choose to ignore it but the helm is ruined.

Item Charges
Instead of  having charges, magic items now have a charge die assigned to them.  Every time you use the item roll the charge die, if you roll a 1 the charge die drops to the next lower die.  If you roll a 1 on the D4 then your item is out of charges.  For example,  if an item has d8 charge die, then you would roll 1d8 each time you use the item. If you roll a 1 on the D8, the items charge die drops to a D6. The Die order is D30 D20 D12 D10 D8 D6 D4.
I also tend to hand out magic items and spells from AD&D that aren't in the S&W complete book. I use the rules from the original AD&D books or the OSRIC book. The OSRIC pocket SRD book is great for looking stuff up during the game.
Posted by Ryan at 12:37 PM