The Pad of Initiative

Back when I ran D&D 3.0 I came up with all kinds of crazy ways to keep track of initiative. I clipped names to my DM screen. I wrote names on note cards and then shuffled them into initiative order. That way worked pretty well truthfully, but was too much work. I eventually settled on writing the names down on a pad and calling out whose turn it was. Sometimes the players would complain that I was skipping them. I'm sure I was, there's a lot going on when you DM. The ultimate solution was that I made the players keep track of their own initiative. I gave them then pad and told them to take turns keeping track. Whoever had the pad that night got a +1 bonus to their initiative.  The players deemed it "The Pad of Initiative." This method had its good and bad points. I didn't have to keep track of initiative anymore, but the players were pretty terrible at keeping track of whose turn it was. In any case, we continued through both D&D 3.X campaigns and even our 5 year D&D 4.0 campaign with this method. The Pad of Initiative also become the loot list at some point, since it was a pad of paper and it was right there. Now we play Swords and Wizardry and no one needs to keep track of initiative.  (Yeah Sword and Wizardry!) The pad is still around. Now it's simply the loot list. After the last session I glanced at it and had to take a picture of this little gem. In case you can't read it, there in the middle it says "Krakskull is now officially the strongest fighter of Iron Cobra (not Grim, Grim = Loser) but only in his own head. Everyone else knows better. Long live Thaylar (the immortal.)"

Krakskull is the Dwarven Fighter/Cleric. Thaylar is the Magic-User. Grimm is the NPC fighter they hired, and Iron Cobra is what the group calls themselves. 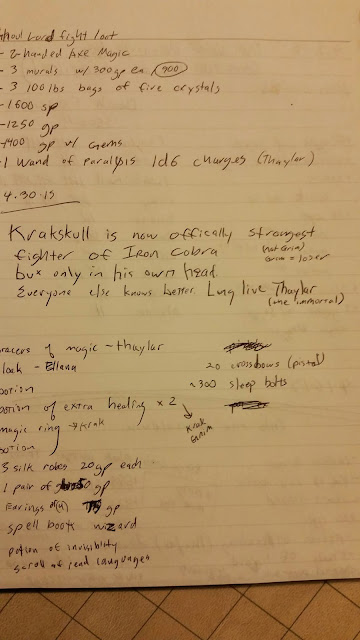