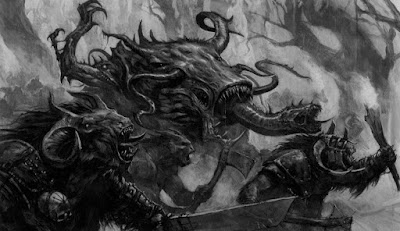 I run a once a month Swords and Wizardry game for some friends. They are about to enter the first dungeon level of the Temple of Elemental Evil. There are a lot of repeated monsters on that level, Gnolls and Ghouls mostly. I wanted it to be more interesting so I  grabbed my brand new PDF of the Monster Alphabet and changed all the gnolls to beast men. I also used a few things from the beast men table in Sailors on the Starless Sea. Here's what I came up with. Feel free to use them in one of your games.

1 - Human with over sized hanging jowls that drip ichor, tiny pinholes for eyes
2- Man-bear
3- Rhino-man
4- Dwarf with a hunched back with a Ram's head growing out of the hunch.
5- Human with a flapping wet mess instead of a mouth
6- Octopus head
7-  Head of a fly
8 - Ram's head
9-  Elf with a Horned viper head sprouts from the middle of its back
10 - Leopard spots with a Komodo Dragon Head
11 - Black Mamba head, can teleport
12 - Jackal head
13 - Razor sharp alabaster swan wings and a caribou head
14 - Water Buffalo Head ; breath weapon of angry bees
15- Halfling with a drooping vulture neck
16 - Hyena head with a psy blast that does 1d8 damage
17 - Ant head with rhino horns
18 - Human head/body with ostrich legs
19 - Frilled lizard head
20 - Gecko head
21 - Scarab beetle head - can speak a power word that ends a single spell or spell effect
22 - Stag beetle head
23 - Wolf head with a tentacled tail that ends in a clawed hand.
24 - Moose head with 2 sets of wings. One is brightly plumed exotic bird wings, the other is expansive pterodactyl wings.
I also took about half the Ghouls/Ghasts on that level and replaced them with Tsathar (frog-men.) That wasn't weird enough though, so I used Y is for Yuck and S is for Sorcery to spice them up.

Tsather Scrouge modified with S is for Sorcery
1- moves with blinding speed, extra attack per round
2- turns invisible 1d3 rounds
3- shapeshifts into giant spider
4- turns in to type 1 demon (Vrock)

Email ThisBlogThis!Share to TwitterShare to FacebookShare to Pinterest
Labels: monsters, Swords and Wizardry