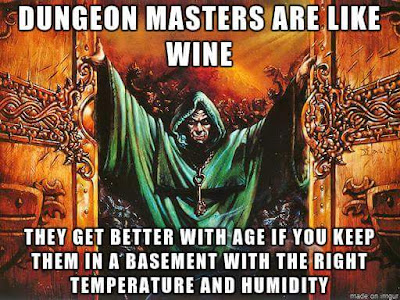 I'm currently running four different campaigns. A few folks I spoke to at NTRPG con seemed surprised that I ran so many. I don't think so. The four campaigns work about to be about 4-6 sessions a month. Personally, I'd like to fit in a few more, but those pesky things like "work" and "kids" come up.

I run two games of Swords and Wizardry, both set in Greyhawk. One is with my regular group that has been together for over ten years. The characters are level 4-5. They recently completed the Lost City of Barakus, and have hooks leading to The Ghost Tower of Inverness, White Plume Mountain, and Lost Caverns of Tsjocanth. Where will they go? (FYI, you can't get those last two in PDF as far as I know. WOTC reprinted them in a hardback not long ago.)

The second group, which has some overlap with the first, started when some friends asked if I would run a monthly D&D game for them. Of course, I agreed. They started out in the Village of Hommlet. Now they are all about level 3 now and poking around outside the Temple of Elemental Evil.

I also run two online games. I started a Dark Heresy game almost 2 years ago with a group of friends who I play 40k with. There were 7 people in the game, and scheduling started becoming difficult. The Dark Heresy system was also becoming a problem with that many players. We had a 3 hour combat that lasted over 30 rounds. Some of the characters ran out of ammo. I deicded to split the group in two. One group continued with Dark Heresy, the other group decided to go with DCC.

The Dark Heresy campaign is nearing it's climatic end. The characters are in the middle of Dead Stars, the last Haarlok trilogy adventure, and approaching Ascension level. Playing once a month, we  will probably take the rest of this year to finish. I suggested that we start a Rogue Trader game next and everyone seemed excited about that idea.

In the DCC game, the characters are all level 2. They recently raided the home of the Emerald Enchanter and are about to come face to face with him again, in the Emerald Enchanter Strike Back. I'm not sure where they will go next. There are so many good DCC adventures. I run the game as an episodic semi-sandbox. I give them leads to a few different adventures and let them choose where to go. I think The God Seed Awakens may play a part.  +Paul Wolfe writes weird stuff.
I like weird.
Posted by Ryan at 1:08 PM