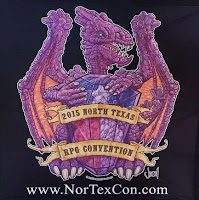 NTRPG con 2015 was a blast! The daily blogging of the con didn't really work out though. Besides Wednesday, I stayed well past midnight every night. Then I was back again each morning by at least 10 am. It was awesome. 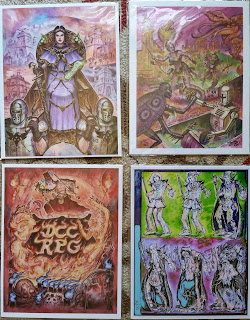 Thursday, I spent the day browsing the vendors and talking to folks. I spent a few minutes talking to +Doug Kovacs and bought some of his sweet prints. I may have a science fantasy problem. That evening, I played in  +Michael Curtis's DCC Lankhmar game. I can't wait for this to be released. I really like what Mike and the DCC crew are doing with Lankhmar. My two favorite adaptations are the carousing charts and the player background abilities. The carousing charts allow characters to regain luck by blowing their loot. Sometimes, bad things happen. +Paul Wolfe ended up naked and nearly toothless after his bout of carousing. The background abilities allows some limited "multi-class" skills. Our band had a thief who could cast a spell, a wizard who was highly skilled with short swords, and a very sneaky warrior. After the game, the whole group hit the Black Blade booth and snapped up lots of cool new DCC stuff.

Friday started off with a second pass through the Black Blade booth. I was so tired when I went through the night before I was sure I had missed some cool stuff. I was right. I picked up the Judge's Guid reprints of Tengel Manor and Citadel of Fire. Next, I played in the new DCC adventure Against the Atomic Overlords run by the man himself, +Edgar Johnson. Post-Apocalyptic science fantasy fires all my brain cells. I think my cleric may have interrogated the AI a little more than was needed. I needed more details! It was so cool I bought two copies of the adventure. (Update: Another copy arrived in the mail today. I  pre-ordered it, so now I have 3 copies. Look for a future giveaway!)

That night, I sat down for some true old school AD&D with +Allan Grohe. The party was exploring his version of the Lost Caverns of Tsjocanth. Allan is a great DM. Not only did he have a Gygaxian-like knowledge of AD&D, he handled 8 players without breaking a sweat. Somehow, I ended up mapping and managed to not get us lost. The group was so into exploring the dungeon I think we forgot what we were looking for. That's okay, there was an epic battle against a group of fomorian giants that was better than any loot. 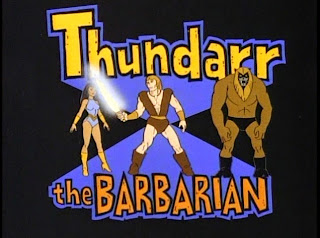 Saturday morning, I was up at the con bright and early to run my DCC Thundarr game. This was the my first convention game in about 20 years. I normally only run games for people I know, so I was a little anxious. I shouldn't have been. It was a blast! The players were an awesome bunch. I even got a round of applause afterwards. DCC Thundarr will be back in 2016!

That night, I played a second game of AD&D this time with +Jon Hershberger. Another Master of the Dungeon who handled our large and rowdy bunch with much aplomb. Jon was running an AD&D conversion of Rob Kuntz's Maure Castle, specifically the "Chambers of Antiquities" level. The highlight of this game was an epic battle against a hydra-headed juggernaut. After we finally downed the beast, Jon said something along the lines of "Most groups bypass the Juggernaut, rather than fight it..." I set it on fire. Just to be sure.

While I was playing, BadMike walked by and told me I had won something in the raffle and I should stop by the booth later. Turns out I had won EVERY pacesetter games adventure in PDF! Too cool.

Sunday, sadly I did not make it back up to the con. I was really wiped out and I had to travel for work early the next day, so I decided to stay home. I know I missed out on lots of cool stuff though.

Besides the folks I mentioned above I also met lots of great people for the first time. In no particular order: +Brenda Wolfe +David Baity +Jeremy Whalen +Josh Mcqueen +Alex Perucchini +Jim Wampler +Marc Bruner +Richard LeBlanc +Nick J  Apologies to anyone I missed!  See everyone in 2016!