I don't know if I'll be able to keep up with blogging everyday, but I'm going to try. I'd heard that there might be a few things going on Wednesday night. I went up to the hotel last night to check it out. A few things indeed! There were tons of games being run and some of the vendor booths were even open. I may have spent some money. I also got to meet Mike Curtis, Steve Perrin, and Jim Wampler!

I played in +Richard LeBlanc's play test of his new mini game based on his Valley of the Five Fires adventure. It's a great little game.  Reminds me of those games that used to come folded up in Dragon magazine.  Rich also smoothly talked me into play testing some new OSR rules for him, like that was hard. Psionics anyone? I only snapped two photos last night. I'll try and get some more today. 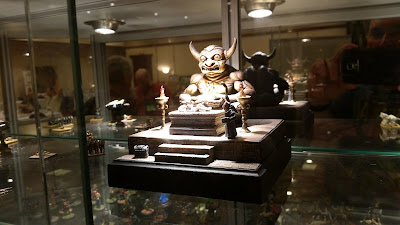 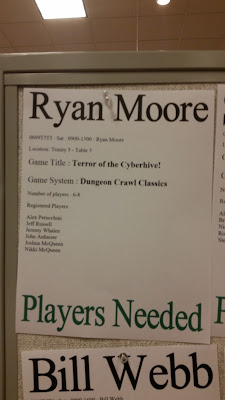