I'm back from Gencon and it was amazing. I wasn't able to sign up for many games beforehand so I was worried. I shouldn't have been. I didn't even make it to everything I had planned.

Wednesday night I got to join in on +Marc Bruner's "10th level" DCC funnel with a bunch of cool people in the Embassy Suites bar area. That's the DCC crew hang out area if you are ever at Gencon BTW. Marc's concept and adventure were great. High level DCC characters intrigue me. They get very powerful at that level. It was cool to see how they work in practice. FYI, they can slay gods.

Thursday, I had my first scheduled game, Freeblades. It's a neat little skirmish game, sort of a retro-clone of Mordheim. Both of my friends bought the rulebook. There is a dedicated line of models for Freeblades but you don't need them. Any ole fantasy minis will work. I had planned to buy it as well but I found something I liked better.  More on that later. 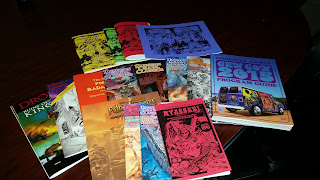 The rest of the day on Thursday, I dove into the Exhibition Hall. I wanted to make sure I didn't miss out on a few books. I bought so much DCC stuff from the Goodman Games booth I hurt my shoulder carrying them out. That wore me out.  I made the trek back to my hotel to drop off my burden, went to dinner and had a few drinks.  I went back over to the Embassy Suites that night to view the first night of Catastrophe Island or "Dougcon," a huge multi-table DCC event hosted by +Doug Kovacs.

On Friday, I played in my only scheduled RPG, Deadlands. I've run the classic Deadlands but I've never played the Savage Worlds version. Ii was good. I thought my character, who was a mage, was slightly overpowered, but that's not all that different from classic. We had our GM rolling with quotes like this: "Are you done interrogating the werewolf? Okay good, I shoot it in the head and set it on fire. Frontier Justice." Now that I've played Savage Worlds, I'd like to play a game of Hell on Earth too.

Afterwards I again dove back into the Exhibition Hall. Every time I go to a convention, I'm either inspired to do something new or reminded how much I love something I've forgotten. There were so many cool miniatures games at Gencon, I was reminded how much I love painting and modeling. After playing Freeblades, I wanted a cool skirmish game. I was considering purchasing an Infinity or Malifaux starter set, when I discovered Wild West Exodus. I was blown away by the models. I purchased a starter set right then. I came back the next two days and purchased even more, including the model above.

I played Powergrid that afternoon, which was cool, but not something I'd play regularly. It's like Catan but with almost no randomness. That night, I ran my DCC Thundarr game over in the Embassy suites. It was a blast. I wasn't planning on running a game, but I'm glad I did. A few of the players said it was thier only game at the convention.

Saturday morning, I played Zombiecide. That was good. I need to play it again. I think it's almost a perfect combination of boardgame and tactical miniatures game. After that I took it slow and wandered around the convention center looking at all the cool stuff. I found the miniature painting competition and took tons of pictures.

I hung out in the area where publishers were showing off their in-development games for a bit. I talked to the guys from Boardcraft for a while. They make nifty 3-d printed games and terrain. Thier 3-d dungeon were aweomse so I backed their Kickstarter. They're local guys from here in DFW. Gotta support the home team!

That evening I had plans to finally attend a panel. Didn't happen. I "gencon'd" it and hung out in a bar with my friends till very late. I didn't even make it over for Catastrophe Island part 2. On Sunday, I made my last and final foray into the exhibits hall. I methodically went down every row that I hadn't been down.  Lots of cool stuff to see. All I ended up buying though was more models for Wild West Exodus.

Oh I almost forgot, I also bought some of Doug Kovacs original art. The Iron Cobra he did for the 4E mosnter manual. As to why I wanted the Iron Cobra specifically is whole nother story. I'll post that one later. This post is already stretching into TL/DR territory.