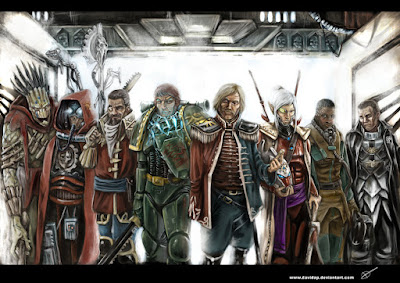 This is part II of my home brew 40k Kill Team campaign. In this entry I'm going to give a general overview of how I'm converting the system from the Fantasy Flight 40k games to a BRP/Call of Cthulhu/Runequest style system. See my first entry in this series for more info.

Rule System
The overall rule system is a combination of Runequest 6th Edition and Call of Cthulhu 7th Edition.  I like how character creation works in Runequest 6. The Endurance/Willpower/Evade skills fit well with how I want to run a 40k game. For everything else, I use the rules for Call of Cthulhu 7th Edition. (I have the PDFs and hopefully it will be published very soon.) Runequest 6 combat resolution is great for a fantasy style game but I want the faster, lighter system of Call of Cthulhu.  The new Luck stat in 7th Edition COC is a nice feature.  I'm unsure about the new D100 based stats that 7th Edition CoC uses but it makes conversion from the 40k games easier.

Character Creation and Careers
Characters are created similar to RQ6. Players pick a background and a career and this determines their starting skills. Some of the backgrounds are different races. They will generate their stats differently and  limit what careers can be chosen. Here's  my starting list of backgrounds and careers. I'll probably add or remove some as I starting detailing them.

Human Careers: Warrant-less Rogue Trader, Pirate, Unsanctioned Psyker, Heretek, Mercenary, Fallen Astropath, Rogue Navigator, Chaos Cultist, Recidivist, Bounty Hunter, Rebel
Space Marine Careers: Renegade, Forsaken
A space marine Renegade is one who has deserted their chapter but not turned to Chaos. A Forsaken is a traitor legionnaire who has given up the worship of the dark gods and left their warband.
Ork Careers - Freebooter, Mekboy, Komanndo
Kroot - Kroot are always mercenaries.
Dark Eldar- Kabal Warrior, Wyche.
There is an entire expansion about the Dakr Eldar for Rouge Trader. There are a number of other Dark Eldar careers(flesh shaper, sky terror) that I may write up only if someone wants to play one.
Tau - Fallen Fire Warrior

Stats
The FF 40k games use the stats as a base score and the skills modify them. When converting to BRP many of the stats simply become skills. A later entry will cover converting NPCs in detail.

The Education stat from Call of Cthulhu is not used.
Skills and Talents
I will be creating my own skill list based on the skill lists from the FF games, CoC and RQ6. Skills function per the BRP games. Talents will be used as written in the FF rulebooks with some modifications. For example, all the dual wielding talents aren't needed as that would be covered by a weapon skill. The Advancement schemes in the rulebooks are not used. Characters are awarded XP which can be used to raise skills or buy talents.

Weapons, Armor, and Gear
Almost all of the gear can be used as written. Armor and damage function the same way in both games. The damages for some weapon might be high but I'll have adjust that after play testing.
Psy Powers
I'm unsure how to adapt Psy Powers right now. Both RQ and CoC have extensive magic systems but that would require me to rework the Psy powers from the ground up. I'm tempted to just use the Dark Heresy 2nd edition rules as written with a little adaptation to make them skill based.

Starships and Navigation
Starships in the 40k Kill Team universe are smaller, require less crew, and are more easily attainable.  Not quite as ubiquitous as they are in Star Wars but more common that they are in the normal 40k universe. A ship does not a require a navigator to make a warp jump. A ship without a navigator can jump to nearby star systems. A navigator can guide a ship much further. I've already written my own set of house rules for Starship combat in Rogue Trader that I'll adapt for this game.  In general, the ships  require about 1/1000 the crew of what is listed in the book. A ship that lists it's crew of as 20,000 would only require a crew of 20. The PCs are assumed to be the command crew and the rest are NPC pirate or mercenary crew members that work for them.  The ships are also smaller. I'd have to do a lot of math to figure out how much smaller, so I'm hand waving it. Assume they are sized appropriately for their number of crew. The ship stats can be used as written otherwise.

Fate Points and Luck
I'll be using both the fate points from the FF games and the luck stat from CoC 7th edition. I think that will balance out the deadlier combat of this adaptation. This will require some play testing.