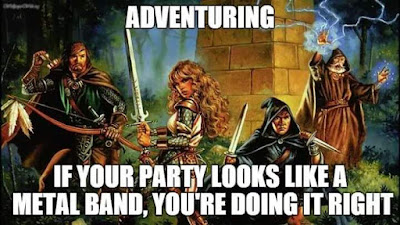 I haven't done a campaign update in a while. Here's what's going on in my games.

In my (somewhat) weekly Swords and Wizardry game, the players made their way through the wilderness area around the Lost City of Barakus, the lost city itself, and then braved the Ghost Tower of Inverness. I dropped a few hints about White Plume Mountain and the Lost Caverns of Tsojcanth. After completing the Ghost Tower the group decided to put the campaign on hold.

We picked up our Star Wars Edge of the Empire game, that we had put on hold about a year ago. To kickoff the restarted campaign, I gave them the choice of three jobs: find a lost treasure ship, blow up an Imperial base, or chase rumors of a light saber crystal. They chose the money.

In the monthly DCC game the reavers pushed their way through +Paul Wolfe 's excellent God Seed Awakens. They figured out NOT to open the prison cells and managed to defeat most of the god seed's guardians. Surprisingly, they also befriended the baby dragonling and a sentient ball of goo. When they defeated the god seed, a void in space opened up and the characters found themselves falling......toward a massive purple planet. Sadly, the dragonling was kept back from the final battle so he was not transported along with them. The goo was though.


The Swords and Wizardry monthly game is going strong as well.  The characters have reached level four. They making their way through the first dungeon level of the Temple of Elemental Evil.  I think we've spent at least 4 sessions there so far. There's a lot left to go. They dispatched the "yucky frog men" but have yet to meet the nasty beast men that I made using the Monster Alphabet.

The characters in my Dark Heresy game are progressing through their last adventure. After we wrap it up, this game will become my Kill Team campaign. I should really finish that before they finish the adventure.