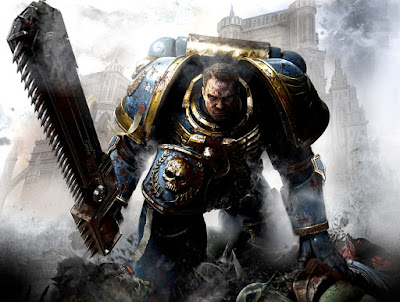 I want Space Marine characters in my Kill Team game. The hard part is that your average Space Marines are like unto gods compared to normal characters. In Death Watch, everyone is a Space Marine, so the power level doesn't matter. In Black Crusade, Space Marine and non-Space Marines work together (sorta), but the Chaos marines are not quite as god-like as their Death Watch counter parts.
In Kill Team, there are two Space Marine characters,the Renegade and the Forsaken. A Renegade is a Space Marine who has turned their back on the Imperium. A Forsaken is a Chaos Marine, who has turned away from the Chaos Gods. Without access to the enhanced technology of a chapter or the magic of the sorcerers, Renegades and Forsaken have lost most of their god-like abilities. Their combat prowess makes them highly valued members of Kill Teams. True Adeptus Astartes don't see a difference between Renegades, Forsaken, and blood soaked Chaos Marines. All will be purged.