Here are the two Xenos races that are available to play in Kill Team. Kroot and Orks are often found as members of Kill Teams. Both are warrior races that seek out the deadly life of a mercenary. I also considered Tau and Dark Eldar characters. Those races are both problematic though and would require a lot more work. If one of the players REALLY wants to be one of those two races I may work something up. 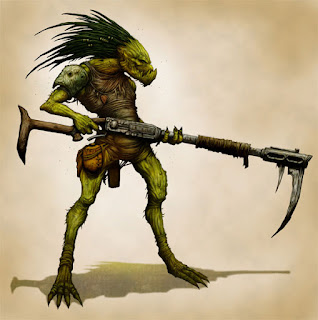 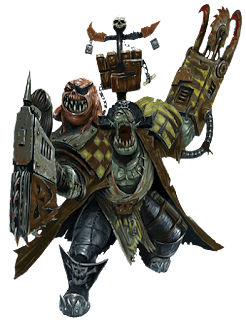 Common Skills: Athletics, Brawn, Endurance, Intimidate, Perception, Tech-Use, Lore(Ork). Language(Low Gothic,Ork)
Weapon Style: Ork (Primitive Melee, Ork Weapons)
Talents: Iron Jaw, Hardy, Brutal Charge
Fate Points:2
Special: Ork Technology is not Unreliable when used by an Ork. Orks add 1d6 to their starting wounds.
Careers: Freebooter, Kommando, MekBoy, Mercenary, Gunslinger, Pirate.
Orks start the game with either a shoota or a slugga in addition to any gear provided by their career.
Note: Orks are never psykers. Human Psykers sense all orks as psychic. The only true ork psyker is a WeirdBoy and no one wants one of those around.

Mekboy
Mekboys are gifted with the genetic knowledge of building and repairing technology. Being smarter than the average ork they often leave their warband and seek out adventure in the void.

Kommando
Kommandos break the ork stereotype of being loud, bestial berserkers. They prefer to sneak up on their enemies and eliminate them silently, or stick bombs on them, cause it's really funny.
Skills: Stealth, Deceit, Demolitions, Lore(Xenos), Security, Survival
Weapon Style: Ork (Primitive Melee, Ork Weapons), Kommando(SP, Bolt,Power,Chain), Two Weapon
Career Ability: Ded Sneaky:  A enemy attacked in melee by an hidden Kommando must make a Willpower test or be unable to act for one round.
Gear: Silenced Slugga, Mono-Sword, Night Vision goggles, 4 Ork Stikk Bombs. Sneaky Armor (3 points all locations)
Posted by Ryan at 2:32 PM No comments: