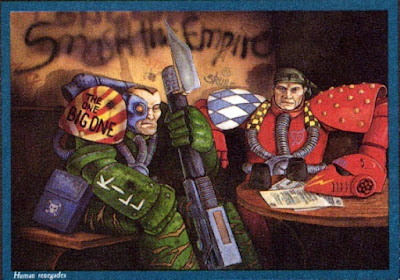 This is a step by step guide for creating a Kill Team character.

2. Roll your stats according to your background.

5. Computed the listed starting bonus in all basic skills.

6. Spend 100 points on the skills listed in your background.  No skill can be higher than 75%.

9. You receive all gear listed in your background and career.  Each character also gets 1 piece of non-weapon, non-armor gear per 10 points of reputation.

Weapon Skills may be listed as a Weapon Style. For example, the Forsaken has the following weapon skills: Legionnaire (Bolt, Plasma, Melta, Chain, Power, Primitive,Thrown,Unarmed); Two Weapon; Heavy Weapons.  The Legionnaire skill is a weapon style that includes all the listed weapons. Two weapon and Heavy weapons are separate skills.  The Two Weapon skill allows the use of a one handed weapon in each hand. The heavy weapon skill allows the use of a heavy weapons. The character must already have a skill in the weapon to use either of these skills.

The Reputation skill is a special skill that can only be raised with the free points in step 8. This skill represents both the characters reputation among the Kill Teams as well as their personal wealth.
Kill Team Skill List
Kill Team Character Sheet