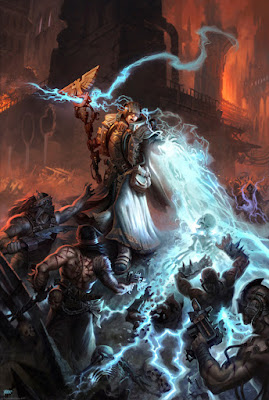 This is a continuation of my posts about creating a Kill Team campaign. A Kill Team often includes a psyker, namely the Rogue Psyker and Disavowed Adept. Here are the rules for using psykers in a kill team game.

Each Psy discipline (Telekineis, Telepathy, Pyrokinesis, Biomancy, Divination) is it's own skill. All focus power rolls use this skill. There is no bonus or penalty to this roll for using a higher or lower psy rating.

Characters are one of two kinds of psykers: Bound or Unbound. Unbound psykers have not undergone imperial conditioning. Bound psykers have been trained by the Imperium to resist the incursion of warp creatures. When making a focus power test, all psykers suffer a psychic phenomenon on a roll of 90-100. An Unbound psyker adds 10 to the results of the psy phenomenon roll.

New Psy powers are learned like talents. The character must have the appropriate psy discipline skill and meet the prerequisites for the psy power. the powers must be learned in the order shown in the rulebook for each discipline. Use this conversion guide to convert the prerequisites.
Strength - Strength
Toughness - Endurance
Agility - Athletics
Intelligence - Psyniscience
Perception - Perception
Willpower -Willpower
Psyniscience Rank X - Psyniscince skill of at least Rank X 15

Here is a summary of the psy rules for easy reference.