Crowd-sourced from the awesome folks at the G+ DCC community. I give you D30 names for your post-apocalyptic cyber-sorcerers! Roll twice to give them a title.

I'm getting ready to run my first Kill Team game this week, so I need to convert a few NPCs This is  easy given how similar the game systems are. For combat NPC a full conversion isn't needed, only the combat stats. For a full fledged NPC I wouldn't worry about converting them and work up the stats from the ground up, using the original stats as a guide.

For the first conversion, I'll convert a cultist (strain initiate DH 2E pg 406) the ork of the 40k universe. I'm using Dark Heresy 2E, but these guidelines will work with any of the 40k RPGs. The stats needed for combat are weapon style, dodge, endurance, willpower, wounds, armor, weapons, and talents.
To convert Weapon style, assume it covers all the NPC's weapons plus primitive melee. Take the higher of the WS and BS stat and add 10-20 points to it, depending on how good you want the NPC to be. The cultist has WS of 30 and a BS of 33, so I'll give him a weapon style of 43.

Dodge converts directly, use the NPCs AG stat plus their dodge skill if they have it. The cultist has an AG of 37 so that is his dodge. On tougher NPCs you can add 10-20 points to this. In my experience, NPCs with a high dodge makes combat last longer that I want. Also I forget to have them dodge anyway. Use the toughness stat for endurance and willpower for willpower. Again add 10 - 20 points to these for more experienced NPCs. I'll add 10 to both of these for the cultist.

Wounds and weapon stats convert directly, so use those as written. The cultist has 11 wounds and uses a Stub Revolver.  For armor, add the toughness bonus and armor together and consider it armor. I've been using this rule in my 40k RPG games for a while as it speeds up combat. Our poor cultist only has a toughness bonus of 3 and a single point of armor.

Talents are a little more difficult and have to be converted on a case by case basis. Many of them won't have any bearing on combat. 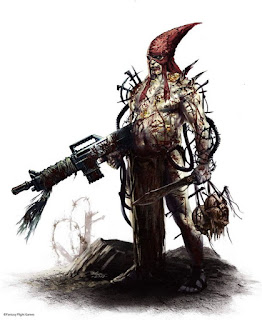 In the next entry I'll convert a more complicated NPC, the murder servitor!

Skills
Bonus/Penalty Dice
Luck
A character can spend luck points to alter a die roll. Only skill rolls can be altered. Spend an amount of luck and subtract it from the die roll and the luck score. When luck is used, a skill check is earned in luck but not the skill modified. At the end of the adventure, roll higher than your current luck score to gain 1d10 luck.

Sanity
Sanity is your tenuous grip on reality. Things from beyond space and time, true horror, and some Xenos will cause Sanity damage. Sanity is not fear but rather the wearing down of your mental fortitude. Losing 5 or more point of SAN in one roll causes temporary insanity. Losing 1/5 of your SAN in one day plummets the character into PTSD and indefinite insanity. Characters suffering from indefinite insanity must make a willpower roll to behave normally and must recover at the end of the adventure.

Weapons
Weapons work as described in Dark Heresy Second edition. There is no change to the weapon stats.
Posted by Ryan at 1:36 PM No comments:

10 things to know about the Kill Team universe 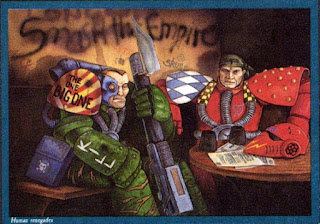