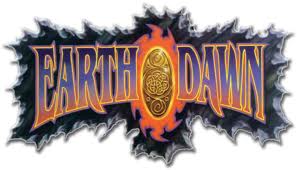 Hi all, Ryan was kind enough to let me invade his blog to post the Earthdawn to DCC conversion I've been working on.  First let me give you a little history on why...

I grew up playing DnD starting in the 3rd grade run by Ryan as well as many other games. I was pretty much his guinea pig for new games (CoC, Paranoia, Runquest, Rolemaster, Shadowrun, Aftermath, GURPS, Deadlands, and on  and on...)  I mostly played in his games and ran some games for my group of friends as I got older. Getting an expanded view on most RPG's I liked them all but swords and sorcery was always my favorite. In 1993 the culmination of all my favorite games were placed into one game and I loved it ... Earthdawn.

Earthdawn is a world that was destroyed by magic and the horrors it had unleashed. It was swords and sorcery, it was post apocalyptic, and it was horror. You played hero's that emerged from Kaers (Bomb Shelters warded with Magic)  to venture into an unknown world (Post Apocalypse) that was torn apart by unspeakable horrors (CoC fix). I loved the story and the ideas the game had on magic items and building your character into a legend in the new world. The main thing I didn't like was the system... it was very complex... combats could drag on forever especially at higher circles.

The last few years I have gotten into DCC (Once again because of Ryan) and attended the NT RPG Con. I played a lot of Old School games but in both years that I attended, I never saw Earthdawn.  I decided to take DCC for all the freedom it gives and adapt Earthdawn to it.

Here are the conversions for classes:


Dwarf Weaponsmith
Player may choose to be a Dwarf from DCC book or a Dwarven Weaponsmith if the Weaponsmith is chosen use the following rules.
Same Progression as Dwarf
Weaponsmith : No Sword and Board.
May cast Blessing during combat as DCC Cleric.  Add deed die for casting bonus. No Matrix needed.
The Weaponsmith has a talent die that follows the same progression as the bard in Crawl #6.  This die plus Int bonus is rolled for his talents.
Talents:
May forge and repair weapons and armor.
Item History : May cast Detect Magic but only on weapons and armor .
Elf Archer
Progression as Ranger  Crawl #6    Archer (Archer expert)
At 1st level the Archer can cast Magic Missile as a Natural ability.  It doesn’t need a Matrix but can be lost.
Tskrang Swordmaster:
Progression as DCC Warrior.  Deed die may only be used on deeds involving a sword. May only use swords, or sword and shield.   Armor (No Check penalty greater than -5)
On any deed die roll that is successful may add +2 to AC for 1 round.  (This due to a swordmasters ability to taunt and confuse their opponents.)
Tail :  Tskrang tails are like an extra arm.  It can be used to grab hold of small objects.   They also can use it for a tail whip as well as attaching a dagger sized weapon to it.  (If Tail is used along with a normal attack a d16 is used for each attack.)

Swordmasters survive by their luck and wits and as such regain Luck as a thief per DCC book.

Ork Cavalrymen :
Progression as Orc from Crawl #5.
Mount Bond – At 1st level the Cavalryman bonds with his war mount.  At 1st level the Cavalryman can bond with  a War Horse, a Staijan (A bison like animal), or Thresher (velociraptor) . The Cavalryman gets a deed die as a warrior  that can be used for anything while mounted.  The Cavalryman has a telepathic link with his mount and can use his senses if needed.  (DC 11 +Luck Bonus). If at anytime the mount is killed the Cavalryman loses d3 luck or d3 Stam(Players choice) until he can bond with a new mount.
At 5th level the Cavalryman may choose to bond with a Thundra Beast(A lizard/rhino)  or a Dyre (A bear/Bull).  His bond with his original mount is lost.
For the Staijan use the Large Herd Beast from Critters,Creatures and Denizens(CCD) Supplement pg. 56.
For Thresher use Large Lizard on pg 154 CCD.
Thundra beast use Huge Herd beast. Pg 56 CCD
Dyre use Huge Heard Beast but  remove Gore attack and it attacks as a Kodiak bear pg 41 of CCD supplement.

Windling Beastmaster :
HD: D4
Use Halfling attack and save progression from DCC.
Windlings gain Astral Sight, Flight and AC Bonus at level 1.
Astral Sight : As Detect Magic.  Can never be lost. Doesn’t require a spell matrix.
Flight : Windlings cannot fly constantly.  After 20 mins of flight the Windling has to make a Fort save if failed the Windling takes a 1 point of  Stamina damage every round until he stops flying and rests for 20 mins.
AC Bonus :  Windlings get a natural +d3 to AC at 1st level due to their small size and agility.
Beastmaster:  At 1st level can cast Summon Animal and Find Familiar per DCC book.  No Spell matrix required.  At 3rd,5th,7th,9th level the beastmaster may gain another familiar in addition to the ones he already has.
Luck : Windlings spend and regain Luck as a Halfling per DCC rulebook.

Sword and Board as Dwarf

Obsidian Man
As Barbarian from DAMN #1


Warrior:
As DCC Book
Troubadour:
As Bard in Crawl #6 except they have no starting spells.  They are able to cast spells from scrolls and Grimoires.  They regain luck like Thieves and instead of choosing between Lore or Talents the Bard has both in place of starting spells.