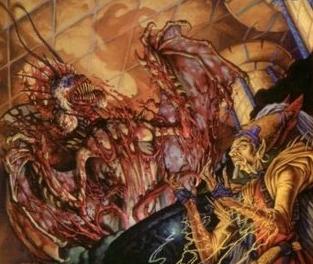 Earthdawn is a world of high magic. The people of the past used it unchecked and let the Horrors into this world. Astral Space contains Horrors that can mark, attack, or even take control of a spell caster if they are not careful. Spell casters have created spell matrices to hide their magic from the Horrors of Astral Space.

Spell Matrix: A spell matrix protects a spell and hides it. A character can spellburn no more than 1+ INT bonus from a matrix spell. Mercurial effects do not activate and Corruption cannot be gained from a spell in a matrix. A spell that is in a matrix is still lost on a failure.

Spell casters can place a spell in a spell matrix at any time taking 10 mins. If a spell caster doesn’t have a spell they need in a matrix they can attempt to re-attune a matrix on the fly.

Re-attune Matrix on the Fly:  A matrix can be quickly re-attuned to a new spell on the fly.  The caster takes one round, spell burns 1 point and makes a casting check.  If successful he has re-attuned the matrix to new spell.

Casting Raw Magic:  Casting raw magic opens up a spell caster to the Horrors of Astral Space. It is like shooting off a flare on a pitch black night. Raw Magic can be cast at any time. Spellburn can be used  and the Mercurial effect will go off. When casting raw magic, there is a chance that a Horror will take notice of the spell caster.

When Raw magic is cast a Will save and a Fort save must be made (DC 12). If the Will save is failed the chance for corruption is increased as shown in the chart below. (Ex. In a safe area a roll of 1 will give you corruption in an Open area if a 1-6 is rolled on your casting check corruption is gained. ) If the Fort save is failed the spell caster will take damage from the raw magic as shown on the Fort save chart below.  There is also a chance that a Horror will notice the spell drawing them to the caster.  The Horror Mark bonus is the bonus that a Horror will notice the caster.  Ex.  If your in a safe area there is little chance for a horror to notice you  in a Corrupt area it is highly likely that one will notice you.  (DC 15)

All Spellcasters but wizards gain 1 extra spell and matrix at 1st level. This is to represent their innate ability with magic. Spellcasters choose their starting spells from the list below. All spellcaster progression is the same as a DCC Wizard.  All casters get 2 spell matrices at 1st level and additional at 3rd,5th,7th and 9th.

Wizard :
The Wizard does not have natural affinity with a certain type of magic. Wizards impose their will and knowledge to cast formulaic magic. Wizards have the ability to cast any spell and are not tied to one tradition.

Illusionists cast spells that work through deception. However, some Illusionist spells do have real effects. Illusionists learned long ago that if everything they did was an illusion, people
quickly caught on and their magic became less effective. Now they balance real magic, illusions, trickery, and sleight of hand.

Nethermancers are spellcasters who specialize in the magic of the netherworlds. Their interests focus on other planes, and the spirits and creatures that inhabit those planes. Most people consider Nethermancers to be a little “off” in an eerie sort of way, and consequently followers of this Discipline are unlikely to win many popularity contests.

Nethermancers can turn undead/horror constructs as a cleric of same level.  At 5th level they can attempt to turn horrors.

An Elementalist is a magician who focuses on learning about, and gaining power over, the
five magical elements: air, earth, fire, water, and wood.

*Elementalists can Summon Elementals instead of Demons.


Elementalists can attempt to turn creatures based on the elements as DCC Cleric.


My next post will cover Patrons or Passions as they are called in Earth Dawn.
Posted by Unknown at 7:58 AM