The Kill team managed to pick up a few allies (other criminals) during their liberation (theft) of the Chains of Judgement. 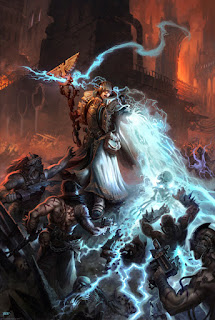 Karnak Zhul
Karnak is a rouge psyker and a mutant. He is both a telepath and telekinetic. In addition his psy-powers, Karnak has the ability to sense the ebb and flow of the warp, similar to a navigator. He was responsible for hacking the stasis pods that imprisoned the kill team. This lead to the evntual capture of the the prison ship, Chains of Judgement. Karnak's sheet is here. 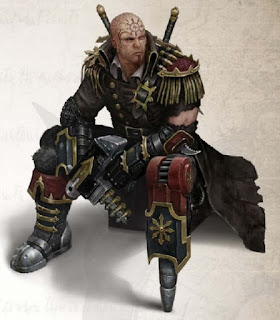 Biff was the first mate of a crew of pirates. He was captured by the Inqusition and frozen for transport to a prison world. The Kill team freed him and some of his crew, who assisted in the acquisition of the Chains of Judgement. 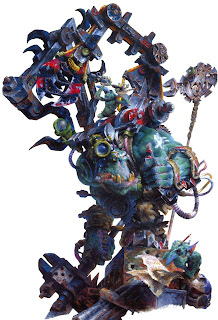 In desperate need of someone who could repair the ship's failing warp engine, the Kill team awakened RekWakka the Ork from cyro-stasis. The ork took the situation in stride. With a few whacks and some wonky bitz, the drive was quickly repaired. The creature is now the valuable, if somewhat unstable, ship's engineer.

Dex: 15
HP:25
Armor:7
Shoota, Power Claw.
Skills:50%
Athletics, Brawn, Endurance, Intimidate, Perception, Tech-Use, Lore(Ork), Language(Low Gothic,Ork), Demolitions, Trade(Armorer,Shipwright,Technomat)
Career Ability: Wonky Bitz  A Mekboy can temporarily "improve" any piece of tech. Roll Tech-Use. If successful the technology is improved until the end of the current encounter at which point it breaks and must be repaired. Weapons: +10 to hit, +2 to damage, Armor: +2 AP, other tech as appropriate. (Vehicles go faster, Tech works slightly better, etc.)
The rest of the Crew
The Kill team recruited a number of criminals and space pirates who were held in the ship's prisons. Eleven of them survived their liberation. 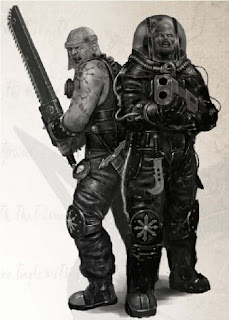 Armor: 4
LasGun or Shotgun
30% in these skills: Tech-Use, Dodge, Willpower, Endurance, Athletics, and their weapons.
Five of the crew are bullet stoppers and have the basic skills.
Six of the crew have voidship skills in addition to the crew skills above.  (Voidship Pilot, Gunnery, Tech-use, Navigation.)