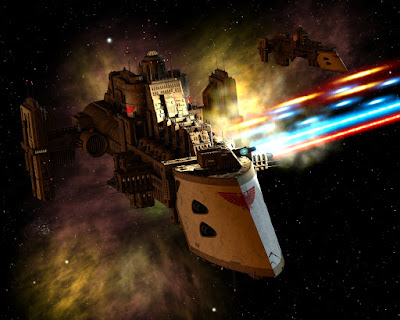 The Chains of Judgement began its life long ago in the forges of Mars. During the Heresy  it became a renegade ship fighting against the Imperium. The destroyer was captured by the Angevin Crusade during a battle for the Calaxis sector. The inquisition acquired the ship and  re-purposed it as a prison barge, one of the infamous Black Ships. Now in the hands of the Kill Team, it has returned to being a renegade.

Havoc Class Raider
Crew:24
Speed:9
Maneuverability:25
Detection:10
Hull Integrity:30 (currently 20)
Armor:16
Turret Rating:1
Space:40 (All used by current equipment.)
Weapons Mounts: 1 Dorsal, 1 Prow
Prow Lance has been destroyed and must be repaired before a weapon can be placed there.
Mars Pattern Macrocannons in the dorsal mount. The ship also has a torpedo launcher. It is currently loaded with 2 boarding torpedoes and 2 plasma torpedoes.

Jovian Class 2 Drive: 45 power
Other systems: Standard Warp drive, Single Void Shield, Standard Life sustainer and crew quarters, Mark 100 auger array.
Warpsbane Hull:  As a former Black Ship of the inquisition, the hull of the ship is lined with Hexagramatic wards. +10 to pilot through the warp. May reroll Warp encounters.
Machine Spirit: As a former raider ship pressed into service by the inquisition the machine spirit is full of anger.  +1 Speed and +7 Maneuver in combat.  -1 speed -5 to Maneuver and detection out of combat.
Prison: The main part of the ship has been converted into a prison. There are specialized rooms for storing particular dangerous passengers in cryo-stasis.
Murder Servitors: The ship is equipped with facilities to build and maintain murder servitors.  These give a +20 to boarding actions and when defending against boarding actions. Up to 12 can be can taken off the ship for other missions by a tech priest.
Destroyed Shuttles: All of the lighters and shuttles have been taken or destroyed. The ship is equipped with  2 boarding torps, and 2 drop pods.
Posted by Ryan at 5:39 PM