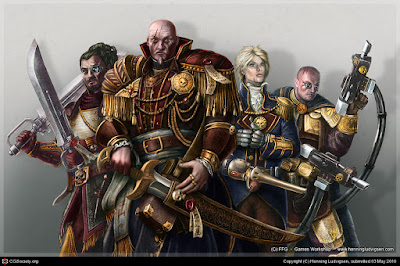 During a ship combat the characters may make extended actions.  Each character who did not perform a firing action or maneuver action may take one of these actions instead.

Active Augury
Gain information about surrounding area and detect hidden ships. Can also be used to scan an enemy ship to see its components.
Perception + Detection

Aid Machine Spirit
Tech-use
Add +5/+10/+15 to detection or maneuverability for one round.

Hit and Run Attack
Pilot Voidship - enemy turret rating to get in position.
Opposed command check vs enemy captain.
Roll 1d5 on crit chart on a success.
One point of hull damage for each level of success.

Jam Communications
TechUse-10
Stop all communication to and from a ship.

Repel Boarders
Command
+10 to command rolls to defend against hit and run attacks
+5 for every additional level of success.

Put your back into it!
Intimidate or Charm
+5 to Attacks, repairs, or put out one fire.
+10 on a special result. 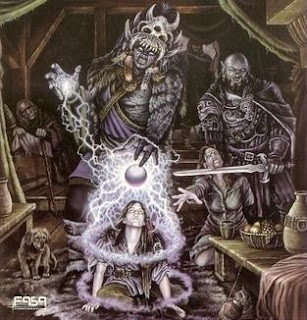 Posted by Unknown at 8:40 AM No comments: