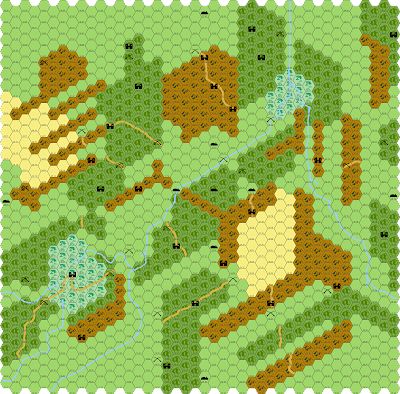 Recently I've become enamored with hexcrawls. A mixture of things came together in my brain and inspired me to start creating my own hexcrawl:  Astonishing Swordsmen and Sorcerers of Hyperborea, a great series on hexcrawls over at the Hobbs and Friends of the OSR podcast, and playing in +Jason Hobbs Kalamata hexcrawl game. I started casting around for hexcrawl resources (well googling anyway), and found load of neat stuff. Check out the resources below for your own hexcrawl games.

Hexographer  - Pretty much the de-facto standard for hexmapping these days.
Two awesome hexmaps for Hexographer, the Isle of Dread and the outdoor survival map.
ASSH encounter tables made by a kind soul on the ASSH board.
Meatshields, the classic NPC generator
The Book of Lairs by Simon Forster.
The AD&D Book of Lairs

While at NTRPGcon I picked up two great print books. Off the Beaten Path by Thom Wilson and Dungeonesque Chronicles Malloy's Almanac. Off the Beaten Path is another great book of small encounters you can drop into a hex. I'm not sure where you can get it other than from Thom himself.  Maybe write him at his site Throwi Games. Malloy's Almanac is a neat little book of random tables that can be added to encounters. It should be available from Rogue Comet and some point.

Also make sure and check out the show notes from Episode 10 of the Hobbs and Friends of the OSR for more hexcrawl resources.

NTRPGcon 2017 has come and gone. The convention was fabulous as usual. Many great folks were seen and much loot was purchased. +Grady Moore  joined me again this year and my nephew came for the first time.

We started early with B/X D&D Wednesday night.  +Jason Hobbs  took us through the adventure he had written for his 'zine.  We were joined by the rag-tag crew of +Paul Wolfe , +Craig Stokes, +Frank Brooks, +Michael Bolam , and another fine gentleman who's name I believe was Chris. We all had a great time even my nephew who hereafter was know as "Bludd Moore."

Thursday night Paul Wolfe took most of the same crew through his Viking B/X game.  I liked the pre-gens that Paul had worked up for this game. It was interesting to play level 4 B/X characters rather than starting at level one.  Paul had also put some work into giving the characters a real "viking" feel with real viking names and equipment.

Friday afternoon, we played in +Marc Bruner's DCC Sorcerer! game. Marc had adapted the old counter and chits wargame as a DCC adventure. We each played a wizard with a small retinue of warriors that were represented by war game counters. Combat between units was carried out using the DCC Turn Undead table. Wizard spells could be used to enhance your soldiers. I love this idea and look forward to playing it again with Marc.

Friday night I got a chance to play Astonishing Swordsmen and Sorcerer of Hyperborea with +Jeff Talanian himself! Every convention, I discover something new and exciting. ASSH was definitely it this year.  The game was great!  I like all the unique classes that Jeff created.  I bought the players guide and an adventure from him on the convention and pre-ordred the 2nd edition rule book from the web site. I'm looking forward to running it soon!

Saturday morning I ran my Thundarr game for a a third year in a row. I had a giant group of 10 people! I think this is the first time everyone who has signed up, showed up to play. I wish I could tag all the great folks who played but there were simply too many to remember.  Once I get the adventure in more readable format, I'll post it here.  Thanks again to all my great lpayers!

Saturday evening Grady and I played in Eric Hoffman and +Edgar Johnson's "Barrow Duel." They ran a head to head DCC adventure where one group  played Black Powder Black magic characters  and another group played traditional DCC characters. The goal was to see which group could gather the most treasure. Our side was the old west team. Each team played a few tricks on each other.  We managed to wall the other team up in a crypt and set-up an ambush with a gating gun. Unfortunately, that did not lead us to victory, with the other team scoring more loot. The game reminded me of my old high school convention days where we would play "Head to Head AD&D."

Sunday, I was so worn out that I did a little shopping and then headed home.  Big shout outs to my  my "con" group +Craig Stokes +Frank Brooks  +Paul Wolfe  +Jason Hobbs +Eric Hoffman +Michael Bolam  and my local home team +James MacGeorge +Noah Marshall  +bailey nichols!